Sajanagarh is an attractive small town in the Baleshwar district, in the Indian state of Odisha. This town Sajanagarh is lying around 5 kilometers from the pictorial hills of the Nilgiri. At the map, the township of Sajanagarh at Balasore lies at the latitude 21.48 on the north and on the east at the longitude 86.72. This township is little close to the Highway 19 of the Odisha state. 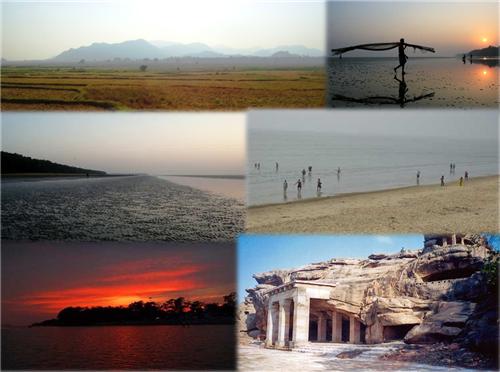 The beautiful Sajanagarh Township was previously called as ‘Sarojini’. This township got its name ‘Sarojini’ from the loving daughter of King of the Nilgiri called Shree Vasant Virat Bhujang Mandhata. As the time passed away, the name of Sarojini mutated into the name called Sajanagarh. Sajanagarh town of Balasore is well known as a pious tourist destination for a large number of visitors.

This place is one among the fifty two renowned Shakti piths of the country. The town of Sajanagarh is very much rich in terms of archaeology. Sajanagarh Township is under the north western hilly terrain of the district of Balasore and is also dotted with a number of hilly terrains as well as covered with tropical partially ever green forest vegetation.

Sajanagarh town is located close to the Nilgiri hills and is perched at an impressive utmost peak of around 1783 ft. The picturesque locations of the Sajanagarh town are an enchantment to a number of people who are tired of the busy and polluted life of the city.  At one period of time, the township of Sajanagarh was serving as a base for the military of the ex-rulers army of the Nilgiri region. The chief attraction of this town is the shrine of the goddess ‘Bhudharchandi. There are delicate and striking stone carvings as well as the works of many deities at the walls of the shrine and also on the bordering walls. The Sajanagarh at Balasore is wealthy in archaeological antiquities and remains; hence this place has become a famous spot for a large number of archaeologists.

The closest accommodation facilities are obtainable is inside the township of the Balasore, where the travelers can easily avail the services of the guest houses of the Odisha State Tourism as well as a lot of budgeted, semi budgeted and also luxury private hotels and guests houses.

In accordance with the records, the Sajanagarh was previously called as ‘Sarojini’. It got the name Sarojini from the loving daughter of King of Nilgiri called Shree Vasant Virat Bhujang Mandhata. He ruled in Nilgiri in between 1421 BC to 1464 BC. Many Kings ruled the state of Nilgiri such as Shree Vasant Virat Bhujang Mandhata, ruled in between 1421 BC and 1464 BC, the Ruler Ramchandra Mardharaja Harichandana and the King Govind Chandra Mardharaja. During their rule, Sajanagarh was serving as a capital. According to many legends and several myths of India, the construction of this shrine of Bhudharchandi in Sajanagarh was envisioned in dream of King Shree Vasant Virat Bhujang Maharaj. It is believed that the deity Chandi came in the dream of that King and ordered him to set up a shrine in the honor of the deity Chandi.

The Sajanagarh is mainly well recognized because of the famed Bhudharchnadi shrine. This place is having one among the fifty two Sakti piths of the Goddess Durga across the country. This archaic Bhudhar Chandi shrine which is a Sakti pith of Goddess Durga still allures a huge number of travelers all through the year from all over the country is also standing as a  evidence for the similar. The shrine of Bhudharchandi is perched around 15.7 kms from the township of the Balasore. This place is nearly 13 kms away from the junction of Sergarh on National Highway 5.

This popular shrine of the deity Chandi was a main center of magnetism for a large number of practitioners and practices of various Tantric rituals at a period of time. However, as the passing of the time, one amongst the offsprings of the King Shree Vasant Virat Bhujang Mandhata, put an end to these various Tantric practices and rituals. In accordance with various historical evidences which have been collected from this place called Sajanagarh, shows that this shrine was established and constructed by the King of Nilgiri called Shree Vasant Virat Bhujang Mandhata who was ruling Nilgiri during the period from 1421 BC to 1464 BC. For strengthening and for coordinating his kingdom, the ruler made the Sajangarh town his capital state and constructed a palace here as well.

A huge variety of handicrafts such as the delicate and stunning stone carved items of the Nilgiri region and also handlooms items are found in Sajanagarh at Balasore.

Kuldiha Sanctuary
The Kuldiha Wildlife Sanctuary is situated at a distance of nearly 50 kms from the Sajanagarh town. Located in the midst of woods, the Sanctuary of Kuldiha is an abode to an extensive range of animals such as leopard, tiger, elephant, sambar, gaur, and the giant squirrel. This sanctuary is a paradisw for countless species of birds as well such as hill myna, hornbills, peafowl, and also several kinds of reptiles. This sanctuary is well linked with the Similipal via Nato hills and Sukhupada hill ranges. Trekking from the Nilgiri hills in the midst of the Kuldiha woods is very enjoying.

Panchalingeswar
This shrine is about 50 kms away from Sajanagarh at Balasore. In the lap of the magnificent Nilgiri Hills together with the bird’s-eye sights around, this is a spot of astounding scenic beauty and is hallowed by the 5 lingams above which flows a continuing stream of clear water. This shrine is a famed shrine of the deity Shiva. The devotees need to lie even on the rocky ground just parallel to that continuing stream for touching and worshipping the Shiva lingams, which also is very exciting as well as adventurous. A large number of elephants could be witnessed infrequently moving up & down the mountains. The area surrounding the Panchalingeswar is a perfect base for the adventure sports like trekking. There is also a guest house run by the Tourism Department of Odisha, near this shrine, where the tourists can stay for the night.

Chandipur Beach
The quiet beach of Chandipur is located nearly 30 kms away from the town of Sajanagarh. It is a tiny sea resort positioned on Bay of Bengal. This peaceful beach located at Chandipur region is certainly one of the finest beaches in the country. The beach is exceptional in the matter that the sea water move away from one to four kms during the outgoing tide. This beautiful place called Chandipur beach is mainly famed for its golden colored sea beach along with even sandy bed.

Remuna
This place is about 30 kms away from the Sajanagarh town. This place is famed for the temple of the Khirachora Gopinath, which is the seat of the Vaishnavite culture since many centuries. Sri Chaitanya, Madhavendrapuri, who was Chaitanya’s teacher and his follower Jeevaswami Goswami, all of them are believed to have stayed in this temple and also worshipped the deity. Khira which is a special dish prepared from milk, is the main and tasty offering of this temple. The Kadamba and Champak trees which are inside the compound of this temple fill the temple’s air with a scented and sweet fragrance every time.

Deokund
This place is also a close by attraction of the Sajanagarh town. This place is mainly admired for its steep and enchanting cascades of clear water, picturesque beauty of the countryside and also a shakti peetha which is located on the outskirts of the Similipal.

Raibania
This place is nearly 100 kms away from the Sajanagarh town. It is also popular is a serene picnic spot. The place of Raibania has got historic importance and is mentioned in the ‘Ain-I-Akabari’ by the author AbulFazal. This place is recognized for numerous forts which are now broken down.

The climate of the town of Sajanagarh at Balasore is hot and muggy. During summer season, the utmost temperature goes to a maximum of 40 degrees and in winter season the minimum temperature falls to 10 degrees. During the time of monsoon, heavy rainfall occurs in Sajanagarh and also in the areas close to it. The finest time to plan for a trip of Sajanagarh is in between October and March. During this time the weather conditions remain pleasant and perfectly suitable for sightseeing.

By Air - The closest airport from Sajanagarh at Balasore is the capital of Odisha, the Bhubaneswar city which is nearly 162 kms away. The Bhubaneswar airport is well linked to all the major cities of the country by air. There are numerous taxis and cabs available outside the airport by which people can easily get to the beautiful town of Sajanagarh.

By Rail - The closest railway station from Sajanagarh is the township of Balasore which is located about 25 kms away from the Sajanagarh town. There are countless trains obtainable in between Balasore & other cities and towns of the state of Odisha. The district of Balasore is well linked by south eastern railways in the own territories of Balasore and also well linked with all other major cities of the country such as Kolkata, Chennai and Bhubaneswar. Outside the railway stations taxis are available by with one can easily get to Sajanagarh.

By Bus- There are a large network of the buses of State transport (OSRTC) and also many private buses which are obtainable in between the main towns and cities of the state of Odisha and the Sajanagarh town. Besides, the National highways also pass through the Sajanagarh town and are very well linked with Kolkata and Chennai.

Fundamental Instructions to Visitors of Sajanagarh

If tourists visit this peaceful and alluring town of Sajanagarh at Balasore during summers than light cotton clothes are advisable for them as the temperature goes to a maximum of 40 degrees during summer.