Kuldiha wildlife sanctuary is an integral part of Baleshwar district in Odisha . Apart from being known as a coastal district, this wildlife sanctuary gives Baleshwar its identity. If one visits this sanctuary, he finds abode amidst the hilly terrains and densely populated deciduous forests. A lot of wild animals have made this place their home and living habitat since a long time.

It is considered to be ideal location for a wildlife trek or if one wants to go on a hike. This sanctuary opens to Simlipal via the Sukhpada and Nato hills. Gadasahi forests are located to the south west of this wild life sanctuary. 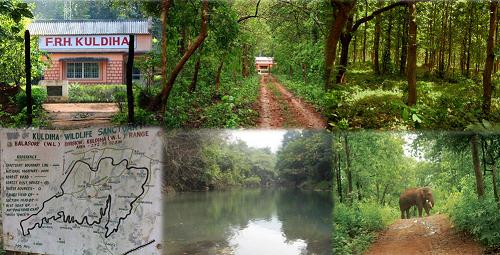 Kuldiha is a major wildlife sanctuary in Odisha which has, over a period of time, become an abode to rare animals and plants. Spread over an area of 272.75 sq. kms this wildlife sanctuary is large and practically the most beautiful sanctuaries ever seen in India. The wildlife sanctuary was first established in the year 1984. This dense sanctuary covered with trees is currently the home to a lot of wild animals like the tigers, elephants, leopards, bison, gaur, giant squirrels and sambar. One would find a lot of wild birds housed in this amazing sanctuary. Birds like hornbill, hill myna and peafowl are some of the few ones likely to be found in Kuldiha.

Apart from the wild animals and birds, one would find joyous streams flowing along the paths of this forest. These streams not just add beauty to the whole forest but also make up for a home for the reptiles living in this sanctuary. The basic reason for coming up with this sanctuary was to get a place that can protect the endangered species which includes animals, plants and insects.

It is indeed a picture perfect wildlife sanctuary. On entering it, one would find themselves lost amidst the beauty and vastness of the green that surrounds it. The hilly terrain blocked by the greens below the deep blue sky makes up for the vibrancy portrayed by this wildlife sanctuary. The curious question doing rounds in most minds would be what will be seen here, or rather what is first seen when one enters the land of this deep, green forest. Here’s a glimpse of what all is seen here. On entering the jungle, so dense and pretty, one can get to see leopards hanging around the extended branches of trees. These leopards are seen licking their bodies clean, and making themselves appear attractive.

The second scene making appearance would be elephants and deers foraging the ground of this jungle. Indeed a beautiful sight for most people who love to see both these animals. Finding them opening up to the beauty of the jungles is indeed a worthwhile scene. One would find the elephants shoveling the depth of the forest sand just to get their hands on some salt balls. Fowls and monkeys are pretty commonly placed along the different areas of this jungle.

The moonlight glimpse gives one the chance to watch over pachyderms within a distance of say 20 meters. This distance gives on the thrills, and the view is definitely beautiful and amazing. Healthy population of elephants, deers, bison, bear and leopard is also seen, walking down the paths of this jungle. The saltlick is quite often visited by the herbivores.

But, animals are not the only species visiting these popular lands in the jungle. One would find birds chirping and reptiles snorting while they are roaming the paths of this jungle. It’s an amazing feeling that one gets as they step amidst the world of animals; it almost seems like a scene out of a movie so beautiful and real that one naturally gets attracted to it. The mammals that one would find walking this space are Malabar Civet, Barasingha, Rhesus-Monkey, Indian Gaur, Asiatic Cheetah, and Hanuman Langur. Most of these species have been given the status of being rare on this earth.

The birds found here include Asian Paradise Fly-Catcher, Indian Niguljan Cupper Smitha, Orange Brested Thrush, Barbet Indian Pitta, Common Hoppe, and Malbar Trogan. Apart from animals and birds, fauna is a very important part of this forest. A trek along this forest is literally a walk on the grass that grows on the foot hills. It is the grass that proves to be a mat for this region. Apart from the tall grass growing on the foot hills, Mangrove plant species like Bani, Rai etc. are also seen here, which are specifically related to the coastal region. Orchids that grow in the moist climates, are also seen here. There are some rivers that are found flowing from the landscapes of these jungles. These rivers include Tangana, Kamala, Basudhar and Vastal Nala.

Kuldiha is perfectly surrounded by some natural spots that act as add on attractions for this place. If one is planning to visit Kuldiha, then one should also take some time off to visit these spots surrounding the jungles of Kuldiha. Kuldiha is centric to a perfect tourism plan comprising of Chandipur, Remuna, Nilagiri and Panchalingeswar. These are the other tourist destinations that one must plan to visit.

Chandipur: This is the beach area located in Baleshwar. This beach has played host to many missile launches including Agni and Shaurya. It is about 15 km from the Baleshwar railway station. One would find horseshoe crab along the sands of this beach. It is also known for the sand dunes where one can lie and enjoy. It is a perfect place to conduct picnic.

Remuna: Located in Baleshwar Odisha, this town is known for the Khirachora Gopinatha temple. It is also renowned as the birth place of several knowledgeable and famous people. It is wrapped in the blankets of history and culture and tightly bound to it.

Panchalingeswar: Around 25 km from Baleshwar is located the Panchalingeswar temple. There are five Shivalinga present inside this temple. It is atop the Nilagiri hill. The legend has it that these five Shivalingas were enshrined by Goddess Sita during the 14 year exile that she went on with Lord Rama. One should ideally visit this place just to glorify in its beauty.

Winters are the ideal time to visit this jungle and the surrounding areas. The tropical climate makes up for an extreme summer in this region. The summers are hot, and one cannot really walk through the paths of the jungle in this climatic condition. Monsoons get the regions flooded with water. The ideal time would be somewhere between October and March when one can visit this region and look out for its beauty.