Balasore or Baleshwar is situated to the north of Odisha located in the south eastern part of the India surround with West Bengal to the north, Andhra Pradesh to the south, Chhattisgarh and Jharkhand on the west and the Bay of Bengal in its east. Balasore was said to be the capital of Demon king Baneswar. 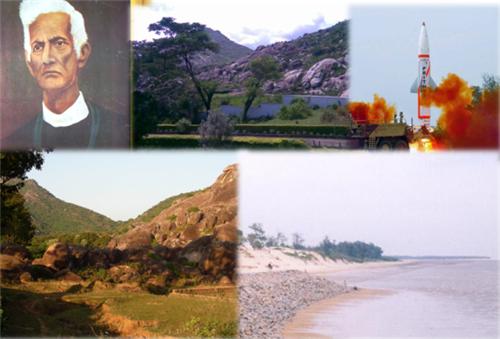 It is believed that Balasore has got its name from the Persian word “Bala-e-shore” which means the City in the sea. The historical evidence found, depicts the name of the district is being kept on the name of the Lord Baneswar which is a form of Lord Shiva. The Baneswar gradually changed to Baleshwar and it is also pronounced as Balasore in modern days. There are several historical monuments still existing in the city of Balasore among which some of the monuments are believed to be of very ancient time and depicts the rich culture of Odisha. There are the ruins of Buddhist monastery which are located at the Kupali, a famous district of Balasore. A few monuments which are said to be the ruins of the ancient kingdoms that ruled over the district of Balasore can be found at Jayachandi forests.

As per the Hindu mythology it is believed that Lord Vishnu incarnated in the form of ‘Baman’ a short heighted human who then asked king Mahabali, the king of entire Earth of that time, for a piece of land equivalent to the area of his 3 feet. King took the demand lightly being unaware of the incarnation of the Lord Vishnu in the form of Baman granted him the land as committed. After he granting Baman turned out to be a huge gigantic creature and covered the entire universe in his one foot, the entire earth in his second and then asked the king to give him the land equivalent to his third feet, hence king offered himself in front of him. Being helpless the King Mahabali then worshiped Lord Varun, God of Water who then got pleased of the devotion of him granted him a piece of land by removing the Sea to a small extent. The land was filled of sand and hence it was known as Baleshwar, the city of Sand.

As per the historical evidences found, Baleshwar was the part of Ancient Kalinaga. In 1868 after the attacks of Mughals it came under their rulings and they ruled over it till the middle of eighteenth century. Later on the Marathas captivated the district of present day Balasore and it then became a prominent part of dominion of the Bhonsle Maratha Kings of Nagpur. In early 19th century district of Balasore came under the rulings of East India Company run by the Britishers 1803 and it became a part of Bengal Presidency up to 1912. But the first English Settlement came into existence in Balasore region in 1634 while Sahajahan was the emperor at Delhi.

The first English factory of British Government was established in Balasore in the year 1640 and just after two years of it, in 1642 the British settlement of Balaslore was formed. Balsore was then became one of the most important trading port for the Britishers. Through Balasore the Dutch and the French Ships use to bring their products and sell them in the state which then became the kingdom of Britishers. In 1763 the districts of Balasore came under the rulings of Danish empire under the ruling of king Tranquebar. The district of Balasore was separately formed in 1828 before that is was a portion of Bengal. In 1845 the Danish India was sold to the Britishers and they formed it as a part of their kingdom and named it as British India.

The state of Odisha was declared a separate entity in the year 1936 by the British government and that resulted the district of Balasore to be one of the integral districts of the state as it was the connected to Bihar and West Bengal. Balasore has also been important in the history of India due to the freedom movement that began here and took it wide spread all over the country. In 1948 the region of Nilgiri also merged with the Balasore and became an integral part of it. The sub-division of Bhadrak became a separate part and got detached from Balasore in the year 1933. The District of Balasore had then only two sub-divisions namely Balasore and Nilagiri, with eight Tehsils and 12 blocks under the jurisdictions of the district administration.

The 8 Tehsils that come under Balaslore are:

The 12 Blocks that come under Balaslore are

Baleshwar – The Birthplace of Great Leaders

Born in a Khandayat family living in a timy village ‘Malli Kashapur’ near Balasore town Fakir Mohan Senapati, who had his great contributions behind the establishment of the Odiya as a differentiated language of India. He lost his at the age of one and also lost his mother just after 14 months of it. Fakir Mohan was brought up by his grandmother and during his childhood it is being said that he most of the times remained ill. Originally the name of Fakir Mohan Senapati was Brajamohan to which his grandmother changed to Fakir. It was a dedication to the Fakirs to which she used take him often. Fakir Mohan got completed his education from Barabati School of Balasore but due to his weak financial condition he could not study more.

At the age of 18 Fakir Mohan Senapati worked as a tacher in the school where he pdid his schooling from, the Brabati School and he was allotted a salary of Rs 2.50 per month. Fakir Mohan Senapati also served as clerk to the Collecorate of Balasore district for a short span and he again took the profession of teacher and continued it till the year 1871. Fakir Mohan Senapati was very much to gain the wisdom and knowledge hence he took par is several discussions of various literature in the several languages like Sanskrit, English and Bengali. In the mean time he came in contact of John Bims, who was the collector of the district of that time and also a Pundit who was known for his writings in the section of grammars of various languages. Fakir Mohan used to teach him the Odiya language and both of them got very well acquainted to each other and worked in the field of literature. On the suggestions of John Senapati was appointed as the ‘Deewan’ of the Nilagiri and was paid a sum of one thousand rupees per month as salary. Later on he served as “Deewan” at various places of Odisha.

During the period of 1896 to 1905 Fakir Mohan was believed to be stayed at the state capital of Odisha of that time, Cuttack. A famous press of that time named ‘Utkal Press’ was also established by Fakir Mohan in the year of 1868 at his hometown Balasore. Several magazines used to publish from the press, of which one of the most famous ones were the ‘Bodhadayini’, ‘Sambad Bahika’ and the ‘Nabasambad’. Fakir Mohan was also the chief president of the ‘Utkal Sahitya Samaj’, a conference that happened in the year of 1912. Fakir Mohan was said to be the one who gave birth to the Literature of Modern Odiya language.

Fakir Mohan wrote thousands of stories, poetry and novels. He also wrote his autobiography and it was the first commendable self-character of Odisha. He was said to be the creator of the modern Odiya novels and short stories. He was also one of the lead authors who used his ink against the British rulers. He described the cruelty of Britishers in very commendable way which worked a lubricant in the common man to awaken against the British rulings. He fought for the conspiracy against the Odiya language in order to stifle it. Several Odiya books were published at the Utkal Press established by him and were also spread all over the state as well as the country. The literature used by Fakir Mohan had the presence of purely Odiya melodrama. It is also believed that the Odiya languafe which is one of the popular languages of Eastern India is due to the contribution of the great soul of Fakir Mohan Senapati. The image of Fakir Mohan in the minds of Odiya was of a intact human, a writer, poet, administrator and also a critic. He got the title of ‘Vyas Kabi’ due to his contributions.

Fakir Mohan was said to the father of the modern Odiya fiction. He was said to be the uncrowned sovereign of the Oriya Language Movement. He conquered every field that he been through and was hence called as a gem and a genius with versatility. He was one of the top ranked poets of the entire country and he also contributed to the society immensely. He was a journalist and also published books that brought the real face of British in front of common man. He was an expert linguist due to his enormous and diverse academic quest. Fakir Mohan Senapati fought single handedly to establish the Odiya Language and made it get a distinct position among other languages. The person life of Fakir Mohan was full of ups and downs. Yet this has no influence on the life of this great poet born on the land of Balasore.

Dr. Laxminarayan Sahu was an renowned writer, a poet, a journalist, a social worker, a social reformer, a historian, a politician who was born in a village named Manikhamb near Balasore. He was one of the most respected personalities of Odisha because of his contribution in the field of History, Economics and Literature. He was very much famous for the usage of several languages as a medium to work in literature like the Odiya, Bengali, English, Sanskrit and Hindi. For the great contribution towards the Literature Laxminarayan Sahu was also awarded with Padmashree. Even today he is remembered for his famous stories of Sulata, Control Room, Veena and amny such famous ones.

He was also a great poet whose contributions included some of the very famous poems of Odisha ‘Pashara’ written by him Laxminarayan Sahu also published newspapers namely ‘Vaitarani’ and ‘Sahakar’ in Odiya language and ‘Star of Utkal’ in English. He alswyas believed that a revolution can only provide solutions to the problems but not the extremism nor the moderates. He also said at many occasions that he can be destroyed but never defeated. Laxminarayan Sahu was a veteran to the theory of ‘Services to the Mankind is Services to the God’. He also put all his efforts during the natural calamities and saved lives during floods, draught and also worked for the development of treatment against Leprosy. He also started revolution against un-touch-ability in the state of Odisha.